I know that one of the biggest points of this blog is to encourage us to connect out into the world, to link the literature to salient details about today.  So I do try to link our literature to things that matter.  But, unfortunately for Ms. Cora Lee, the only thing I could think about when reading about her story was Octomom.

For those unaware of Octomom, she's a single mom who has used fertility treatments and in vitro fertilization to give birth to octuplets.  That's eight babies at once.  Oh, and that's on top of six children she already had.  While unemployed and on welfare.  The initial public reaction to the miraculous survival of her eight new babies was congratulatory and joyous, if a little dumbfounded that something like that could happen.  We, as Americans, were overwhelmed by the incredible cluster of tiny new lives before us and were all behind our medically-impossible mother, donating food, clothes, and even significant amounts of money to the new family.  But as the facts started coming out about her fertility treatments, her unemployment, her welfare, and (worst of all) her six other children, things went a little downhill for Octomom.  People condemned her, ragged on her irresponsibility, berated her poor mothering skills.  To be true, she was a terrible mother.  Latest updates on Octomom confirm that she actually received plastic surgery in hopes of making her lips more like Angelina Jolie.

What I'm trying to get at in all that information is that we seem to be initially overjoyed by babies, but the preliminary celebrations wear off rather quickly.  The fairytale of new birth only lasts for a little while before the reality of raising a family sets in.  This is the same for Cora Lee; she consistently fails to confront her responsibilities as a parent to the children that are aging and instead focuses on her youngest children, those who are still babies to love and hold.  Octomom was quoted in stating that "all I wanted ... was to be a mom. That's all I ever wanted in my life."

But unbenownst to these women, motherhood extends past the initial months and years of babyhood.  Children grow, and to have kids is to say "yes, I know what I'm doing with my life and I'm stable enough to provide completely for another human being".  Neither Cora Lee nor Octomom have jobs, husbands, directions, or ambitions.  Raising a baby is relatively easy, raising a child is frustrating, raising a teenager is infuriating, and putting fourteen young adults through college without a consistent salary is impossible.  Let's hope Cora Lee has a savings fund somewhere, because the path to motherhood will only get harder as she goes.

Cannot get enough of this woman. 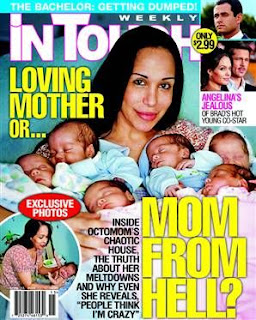